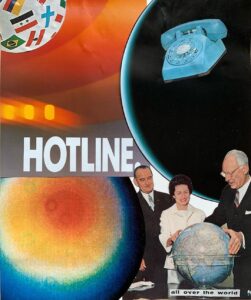 Each work in this series of Collapse Collages is created from one old National Geographic, in an attempt to understand where we are now by looking at how we understood ourselves then. The dissonance can be loud.

Though I grew up in a liberal-minded home in the 70s and 80s, and my mom in particular was of a “waste not, want not” Midwestern heritage, there was not much awareness growing up about where our “belongings” or privilege came from or at whose expense. We were charitable and concerned about suffering locally and around the world, but it felt distant. I even grew up in the Unitarian Universalist Church, which affirms “the interdependent web of existence, of which we are a part” — but I never learned about systems thinking in school or felt any movement in the culture at large toward depth, meaning, or connection. Instead, Reaganomics grabbed us all by the throat and became the dominant belief system of my lifetime.

This legacy of human and white supremacy, going back 500+ years, is the foundation of modern belief systems, and it has brought us to the brink of global collapse. Telling new stories is our only war through this mess.

No comments to show.

Want to hear from us occasionally? Subscribe to our newsletter